Ronald Dekker has been working on miniature valve curve tracer. He was kind enough it make the design available as a (superb) kit. I built one and use it for characterization and testing. See Ronald Dekker’s uTracer website – all about the uTracer

I also wanted to be able to generate SPICE models.  I was able to do this by exporting the data and using a Python script to optimize the parameters of the SPICE models, but it was a bit long-winded and so I decided to embark on a project to write a new GUI, as much for the exercise as anything else.  At the same time I added some a new pentode model and an improved screen current model.

The main features are

This was done and called “uTgui”. This had been around for a year or two and it was time for a change,  so..

Some time after uTgui was done and dusted, Ronald Dekker’s colleague and friend Derk Reefman came up with a better set of SPICE models  and I wanted to integrate those into uTgui. Also I had been testing quite a few KT88 / 6550 size tubes and the 200AmA / 400V limit of the uTracer was causing me a problem. The grid voltage range of -45V was a little short of where I wanted it to be too. A user, Kevin Kennedy, made a couple of great suggestions: make the window smaller and have the ability to modify the tube database rght there on the GUI.

On the hardware side, a look at the circuit of the uTracer convinced me that it could do 400mA on the anode and grid two supplies and about -55V on the grid one supply. On Roland’s wise urging I worked to make the HV switch short circuit proof at these higher currents. This was done by adding a second pass transistor to share the current in each of the two HV switch circuits. If compliance is turned off you can go a little higher. Do remember that the accuracy at low current ranges will be halved so ths might not be suitable for you. It is aimed at the audio power tube fraternity.

Back to the GUI.  uTgui had two panes, one for all the controls and second was a chart for the results, In utMax I changed to use a tabbed interface so the controls were on the first tab and the rest were all charts.  This also had the advantage that each plot could show a different aspect of the data. I also added the ability to auto save all the plots and data at the end of each sweep. The changes are detailed in the release notes below. I should add that these changes are unofficial and Ronald Dekker won’t be very happy if you modify your uTracer and send it to him for repair.  These changes are best kept to only those who are confident in their abilities to fix it.  The good news is that utMax fully supports the original uTracer 3 and the 400V uTracer 3+ versions too. 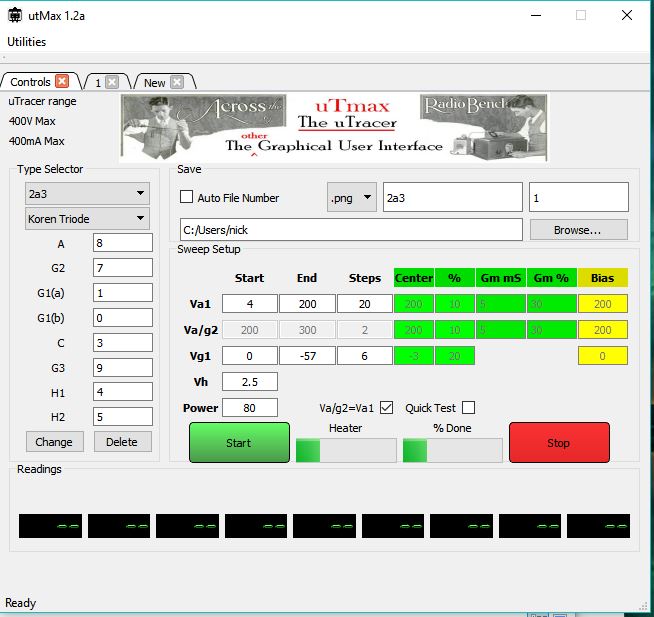 You can see that there are also other goodies like realtime readout LCDs while sweeping, a quick test and a triode plot mode that
tests a pentode and a triode. Not visible but testing of dual triodes and diodes is now possible. I need a volunteer with a MAC for the OSX work. There are a few people working on embedded linux platforms such a Raspberry PI. Any interest in iOS or Andriod?

You can download the executable here…
The latest version is 1.9a. The most recent changes fixed some issues in the options to select fixed current measurement ranges.

which has the ability to scale the grid one voltage to allow an attenuator in the grid one circuit to improve the accuracy at low grid voltages.

For linux you will need to install the shared libraries, see libs.txt for more info. There is some weirdness about Nautilus so just run it from the command line.