The art of tube (valve) matching has been improving for many years. What once required heavy and bulky electronics can be miniaturised using current technology. Just compare the uTracer with the classic Tektronix Curve Tracer.

At one time matching was done by just measuring the current at the bias point. This seemed like a good idea as the currents at idle in the output transformer are matched.

The problem comes under dynamic operation, where the tubes will not behave the same and so draw different currents in response to signal. Then you have large amounts of even harmonic distortion. Also, many amplifiers have significant AC power ripple present and rely on the match of the output tubes to cancel this. So, if they are not properly matched, you have more hum on the output, distortion and the DC bias imbalance is detrimental to the low frequency response of the output transformer.

To combat this, vendors started measuring the transconductance, that is how the current in the tube varies with applied signal voltage.  This does help but since it’s only done at one point it only goes so far. Recognizing this, the next advance was taken by a distributor and given the name  ‘Apex’ matching.  This process takes four measurements:

It seems that this process is more geared towards allowing the vendor to quickly reject tubes and offers little real advance in the actual art of matching.  It’s a shame really as they have gone to so much trouble with it.  It even has it’s own website too. The problem with just measuring transconductance (gm) and bias current is that it is only matched at these two places.  If you change the operating parameters and/or measure elsewhere you will find the match is not so good.

The Ultimate Match is done by taking many measurements. The typical tube’s anode current vs voltage plot
look like this: 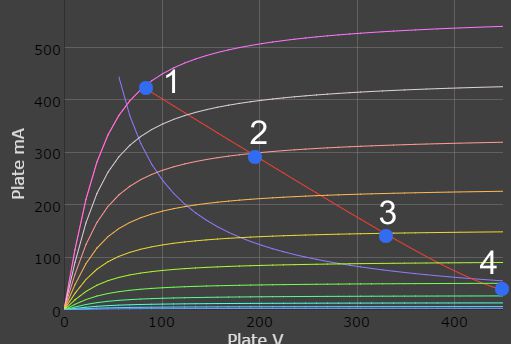 To be useful measurements, the place to do it is along the load line since this is where the tube will operate in a real amplifier (with a resistive load). Such points have been numbered 1 thru 4 above. Now, if you vary the screen grid voltage as may well happen in a different amplifier, you get a new set of curves. So you need to measure along that new load line too. And that is how it works, many current measurements are made as the operating conditions are varied. 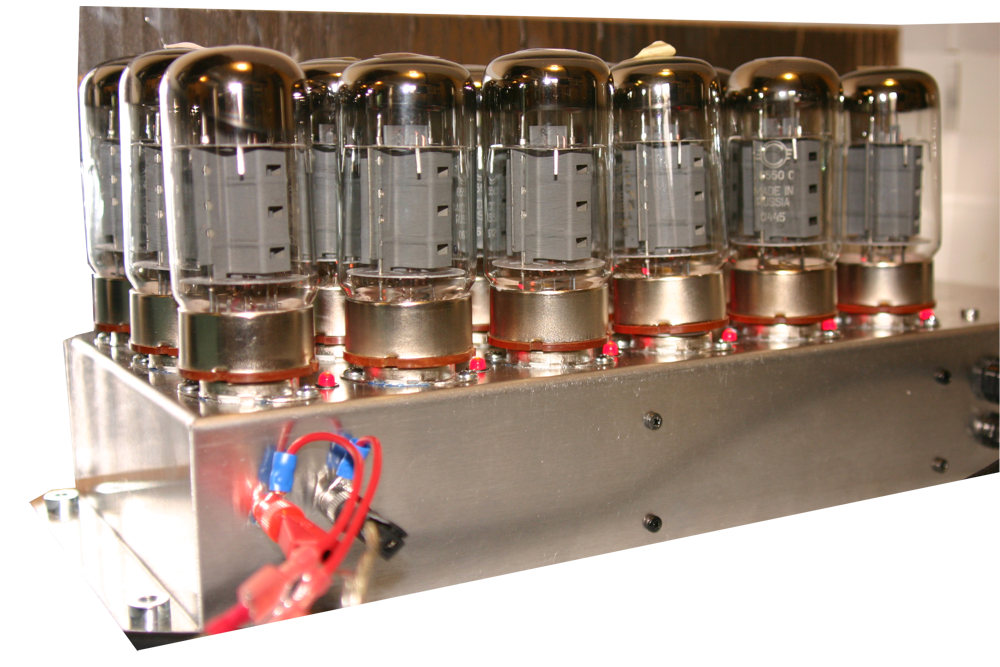 To have a useful system, we had to design the equipment from scratch. Testing one at a time would take far too long so the chassis and electronics are built to accommodate up to 18 tubes. It is capable of testing up to 500V at 1 amp as grid voltages to -55V. Under the hood are three power supplies for the anode, screen and grid voltages. The system measures both screen and anode current. It is controlled by a microprocessor that communicates with a host PC using an ASCII terminal type interface over Bluetooth. The micro is given commands such as ‘set voltage’ and ‘measure’ under the control of the host PC and the data is captured to a results file. Each measurement takes only 80uS so many measurements can be made in very little time. Each single point measurement is done 16 times and averaged to improve accuracy.

Also, since comparisons at exact voltages for different tubes is crucial, the measurement at a specific point is done by taking three measurements around and close to the point of interest. A plane is fitted to these measurements and the desired point is found by interpolation.

Before testing even begins we first pre-screen all the tubes for hum, noise and microphonics. They are then burned-in for eight hours at 110% of nominal heater voltage to allow the mechanical structure to settle. Burn-in for longer periods seems to offer little benefit.
This is another feature of the Ultimate Tube Tester. When burning in you can specify the operating voltage, total cathode current and burn-in time. It is important to run with some cathode current to avoid the build up of cathode interface resistance and shortening the life of the tube. This is something that some of the commercial burn-in systems do not do.